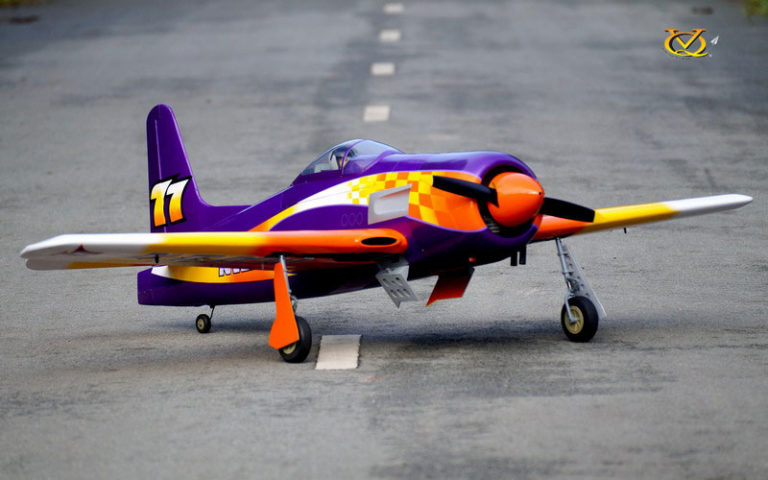 The Bearcat that became Rare Bear was a severely damaged wreck when discovered by Lyle Shelton in 1969. It had been abandoned next to a runway in Valparaiso, Indiana after it crashed there from a throttle-on torque roll in 1962. The airplane had been stripped by parts hunters, so Shelton found a fuselage, wing center section, landing gear and a right wing panel, but little else. Shelton bought the wreck and had the pieces trucked to Orange County and restoration began. One of the major modifications made during the rebuild involved installing a more powerful Wright R-3350 (from a Douglas Skyraider) in place of the Pratt&Whitney R-800 engine that is standard for a Bearcat. A Douglas DC-7 propeller and cowl were used and Shelton bought the landing gear fairings and doors from the wreck of Bob Kucera’s Bearcat. Bill Fornoff loaned him a left wing panel and Gunter Balz supplied a rudder. The windshield and canopy were supplied by Edward T. Maloney. The rebuild was finished with the first flight on 13 September 1969.

Now, VQ introduces the F8F Rare Bear 30cc EP-GP with big battery hatch for easy to change the battery. Aluminimum wing joiner with 2 piece wing for easy transport. This F8F Rare Bear is designed with the scale gear door that can be opened-closed by servo.

Great detail: Thanks to the large cowling fits even a ZG45 engine, only the exhaust pipes are down below.

Option with Electric retracts (E-retracts) and struts. It make this F8F Rare Bear one of the best Balsa scale warbird 30cc size in the market.

Be the first to review “F-8F Rare Bear” Cancel reply